One Day Tour In Israel

One Day Private Tour in Israel

Whether you come to Israel for a limited time, for a personal matter, for Business, Conference, or Mediterranean Cruise you would probably need at least a one day tour. Taking a tour with a private tour guide, allows you to visit more sites, to combine more than one region and use your limited time in a better way. We are flexible and can adjust any tour itinerary to your desires, interests and time. All pick-ups and returns will be from/to your Hotel.

Here are some examples for one day trips in Israel: One Day tour of Jerusalem, and Bethlehem –
Christian oriented

Pick up from hotel, drive to Jerusalem, panoramic view from Mount of Olives, Garden of Gethsemane, Old City of Jerusalem, Jaffa Gate, Jewish quarter, Cardo, Western Wall, Christian Quarter, Via Dolorosa, the Church of the Holy Sepulchre, the Arab Bazaar – the ‘Suk’, room of the Last Supper, Dormition Abbey.

Visit Bethlehem and the Church of the Nativity. The walls of the Old City – Jerusalem

Including the Old City of Jerusalem, Jaffa Gate, Jewish quarter, Cardo street, Western Wall, The Christian Quarter, the Arab Bazaar – The’ Suk’. After the visit in Jerusalem, we shall drive through the Judean Desert to the Dead Sea Shore, for a quick dip/float. Then – return to hotel. This tour is somewhat longer, but includes three regions: Jerusalem,  the Judean Desert and the Dead Sea. Masada and the Dead Sea

One Day – Masada and Dead Sea Tour From Tel Aviv or Jerusalem.

Drive through the Judean Desert, optional short Camel ride, visit Qumran archaeological site – where the Dead Sea Scrolls were discovered. Continue to the impressive fortress cliff of Masada. Ascend by cable car, guided tour of the archaeological site, including fortifications, palaces, bath house, storages and more. Drive to one of the spa beaches on the shore of the Dead Sea for an unforgettable float and swim. Return to Tel Aviv or Jerusalem. 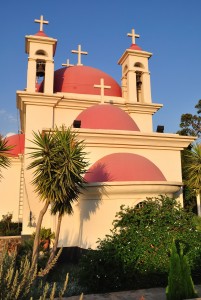 Start the tour by visiting the hometown of Jesus – Nazareth. Visit the Church of Annunciation. Drive through Cana of Galilee, visit Tabgha, the site of the Miracle of the Loaves and Fish. Next, visit Capernaum, ruins on an ancient village and synagogue, believed to be the place where Jesus lived on the shore of the Sea of Galilee. Visit Mount of Beatitude, site of the famous Sermon on the Mount. Drive via Tiberias to the Jordan River site, for a short baptismal. Return to hotel.

Do not hesitate to give me a call.
I’ll happy to talk to you.